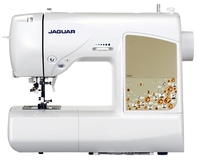 Who is Jaguar Sewing Machines?


This is a question asked by people who have never heard the Jaguar Sewing Machines brand before. Jaguar Sewing Machines is one of the largest and most respected sewing machine manufacturers in the world.  They have around 70 years of manufacturing experience. They only started to sell under their own brand in the UK very recently, this is why you might not have heard about them - check out the below points:

Jaguar Sewing Machines is a well known and respected Japanese sewing machine manufacturer that supplies machines to many of the big brands all over the world. They supply the major brands with their machines so that they can be re badged.
They produce their machines in their own factories. Unlike other big brands, they do not buy machines from other companies and place their ‘badge’ on them.
The company was founded in 1949 under the name of Maruzen Sewing Machine Co, they were initially a distributor of sewing machine parts.  In 1952 they launched their first domestic zig-zag sewing machine
From 1965 - 1977 they expanded their operations by opening supply factories in both the USA and Germany.
In 1978 total exports reached 7 million units
In 1981 they sold over 1 million units of their new compact sewing machines
In 2016 Jaguar launched the DQS (Digital Quick-threading System) machine into the UK.
The 2016 Jaguar range of machines all come with a three year guarantee and also 100% satisfaction guarantee so that you can try the machine with absolutely no risk!